To support practically and emotionally the family and other witnesses attending the Coroners’ Courts.
Registered Charity Number: 1105899 +44 (0)300 111 2141 info@ccsupport.org.uk

In October our Two Toms both took on physical challenges to raise money for the CCSS. Tom North, our North West Coordinator, ran the Manchester marathon on October 10th. Tom Firmin, a grandson of our Founder Trustee, Roey Burden, completed an Ironman Challenge on October 23rd in Portugal. Between them the Two Toms raised over £10,500, a fantastic amount of money. That money will pay for our support service to be set up in two new courts in Hampshire meaning more bereaved families, witnesses and others will be able to access our vital support. Read below to find out about their experiences of taking on the challenges. 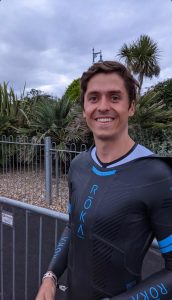 A few weeks have passed now since I crossed the finish line in Portugal and, before my memory of things becomes a bit too ‘fuzzy’, I thought my very kind supporters might be interested in how the whole experience went!
Starting at the beginning…

I landed in Lisbon 3 days prior to race day and very much needed every hour on Thursday and Friday to go through all the standard race prep of registration, gear set-up, practice runs and of course fueling (LOTS of pasta). The nerves weren’t too bad by this point. Apart from a surge of adrenaline as I departed in a black cab in London, I remained relatively relaxed. All the controllables had been ticked off, all I needed to do now was execute my strategy and hope nothing terrible happened.

Disaster nearly struck on the eve of the race, when I simply could not sleep. After 4hrs of tossing and turning, it was nearly 1am – 3hrs until my alarm – and I was starting to think I would be lining up at the beach on the back of an all-nighter. I decided there was nothing for it but to go for a walk, to clear my head. Upon my return to the room, I was met with a wall of heat and realised we had the climate control on the wrong settings. It was 28C! 8 degrees later and I was out for the count. Nothing like a bit of self-sabotage before your hardest ever challenge.

A few hours later, after knocking back the Portuguese take on porridge and more than a few trips to the bathroom, it was time to head to the start line. There’s a crisp, Atlantic chill in the air at 7am and as the sun begins to breach the horizon, the anticipation is building. As we are kept in our holding pen on the beach, the crowd begins to swell and music is pumping out. The atmosphere is electric. At this point I was feeling pretty overcome, but more than ready to get stuck into the beast. AC-DC, Thunderstruck, hits the tannoy (as is tradition) and we’re off – athletes charging into the shallows. No time left to think now. You’re in the zone from start to finish.
The race itself went surprisingly quickly for 10hrs+ of exercise. Your sole focus is in the present; be it the next stroke, the next corner, the pair of legs in front of you or what you need to be eating. There’s not really any space for boredom.
I came out of the water in 1hr09mins (despite an episode of cramp), which I was very happy about. My investment into swim coaching paid off, as I felt relatively good for it too. A long carpeted run took us up to transition and from there it was onto the bike. For the most part it was bliss. A bluebird day, gorgeous scenery and scarcely a pot-hole in sight for 180km! Five and a half hours and countless energy drinks later, I returned to transition still feeling surprisingly good. It didn’t last for long though. The sheer volume of fluid and food one has to take on in order to avoid hitting the wall (or dehydration) does not sit well in the stomach after 7hrs of exercise and by this point the mercury was rising high at 24C. So my first ever marathon was going to be quite an unpleasant one. The following 42km were a steady routine of pouring water over myself, sipping away and trying to avoid chucking up the gels I was consuming. The course layout meant the periods with support were all too brief and it was a lonely grind along the atlantic cliffs. I did my best not to slow, never walked and even pulled out a sprint finish (all about those personal battles), running in a 3:21 marathon.
The feeling crossing the finish line was a mix of joy and relief. Mainly I was just happy to see the faces of my family, lined up as I came down the red carpet to the words “you are an Ironman!” (yes, the announcer has to say it a thousand times). Final time: 10:08:08. 112th out of 1,500.
In all honesty, the finish was a bit anticlimactic. All those months of build up, but by the time I crossed the line I was too mentally exhausted to savour the moment. The days after felt very flat as well. Not something I was warned about. However, as time passes I can take huge pride in the fact that I did something truly amazing for charity and raised a spectacular £7.5k for the CCSS – far more than I had ever dreamed. For that I am incredibly grateful to all of you that sponsored and supported me.
I promised Roey that I would fundraise for her, but that I was saving it for the biggest challenge of them all. Promise fulfilled. 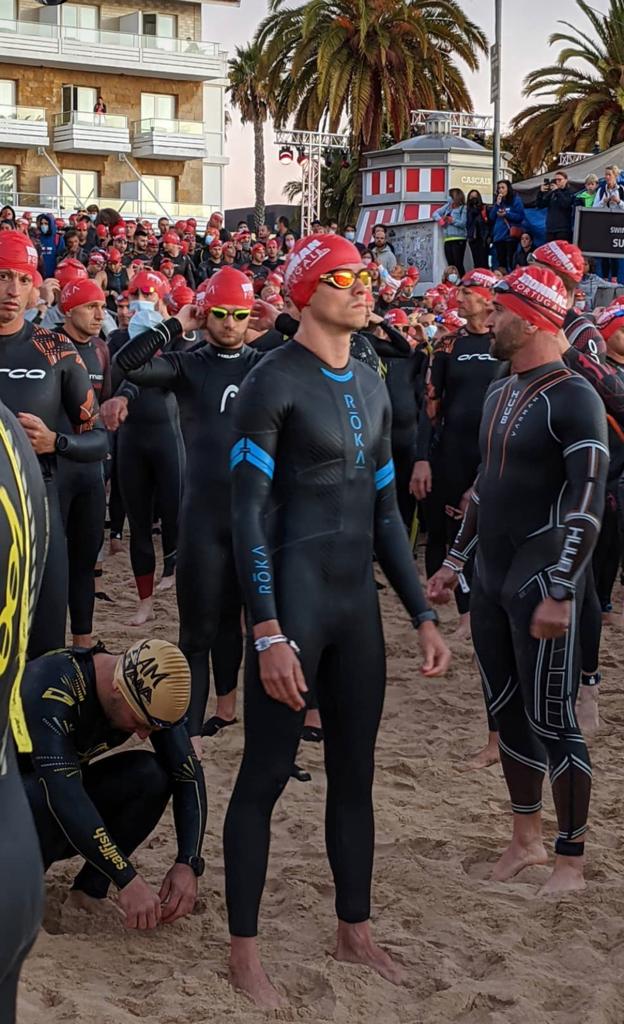 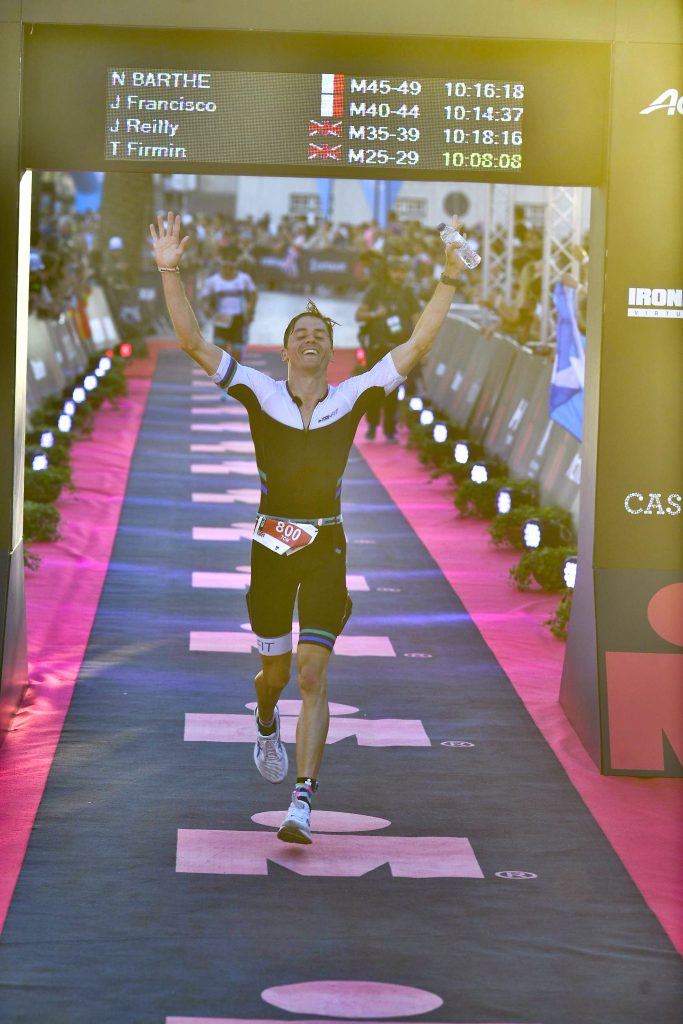 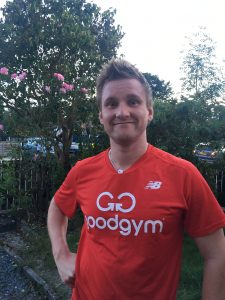 It has now been a few weeks since I completed the Manchester marathon and I wanted to share my experience with everyone who donated. On the evening before the marathon, I ate a large amount of pasta and drank a lot of water. When I woke up on the morning, I felt apprehensive but also excited as due to covid this date has been a long time coming. It was originally scheduled for April 2020. A banana, some porridge and more water were my choice of breakfast.

The start line was buzzing with activity. Lots of runners, loud music, and exercises to get all the runners prepared and motivated to race. The start line was next to Old Trafford, home of Manchester United. As a Newcastle fan I have walked from that stadium after many heavy defeats so I was hoping it would not be a bad omen for me. The first 8-10 miles of the route went through the city centre. I have to say it was quite overwhelming to see the thousands of people lining the streets cheering us all on. My name was on my shirt, so it was lovely to hear the cheers of  ‘come on Tom you can do it’ every now and then. The city of Manchester has faced many challenges recently. Having moved here in 2017 I am still inspired by the spirit and togetherness of the people that live here. The support around the whole route was incredible with people handing out water and snacks to help us round. Many of the people watching were holding signs to motivate us as we went, one sign I remember read ‘You are only ten miles in you still have a really long way to go!’. Signs like this kept people smiling and relaxed as we ran.

We headed out of the city centre towards Sale and Altrincham. As we ran under a motorway flyover there was a DJ playing some heavy techno music. This is also where my girlfriend had pitched herself to watch and seeing a familiar face again was a huge boost to me. We ran round the suburbs of Timperley and Altrincham before heading back towards the city centre. Around 18 miles in I started to feel some painful blisters forming on my feet. There are pace runners who help people time their runs. Until this point, I had kept ahead of the 4-hour pace runner which mas my target. Unfortunately, as my blisters started to get worse the 4-hour pace runner went past me and slowly ran off into the distance. This was a disappointing moment for me, so I had to quickly shift my focus on to finishing the race despite the pain I was in.

As I got into the final few miles I wanted to finish strongly. Turning onto the final straight was quite a relief and I ran as quickly as I could at that point. I crossed the line and although the time was slower than I had wanted (4 hours 23 minutes), I immediately felt like I had achieved something. I stayed around the finish line to encourage a few of the finishers behind me. I felt like I needed to give my support to others after the support I had received. I was handed my t shirt and medal which I was happy to receive. I spent the reast of the day relaxing at home before heading out for a nice meal to celebrate in the evening. Since the marathon I have had a break from running but the week after I was back playing football for my local amateur team. I must say it is a nice feeling to know I do not have to go out on long training runs now it is dark so early on.

I am delighted with the amount of money I raised and want to give my thanks again to everyone who donated and to those who sent messages of support. They really helped me get round!! 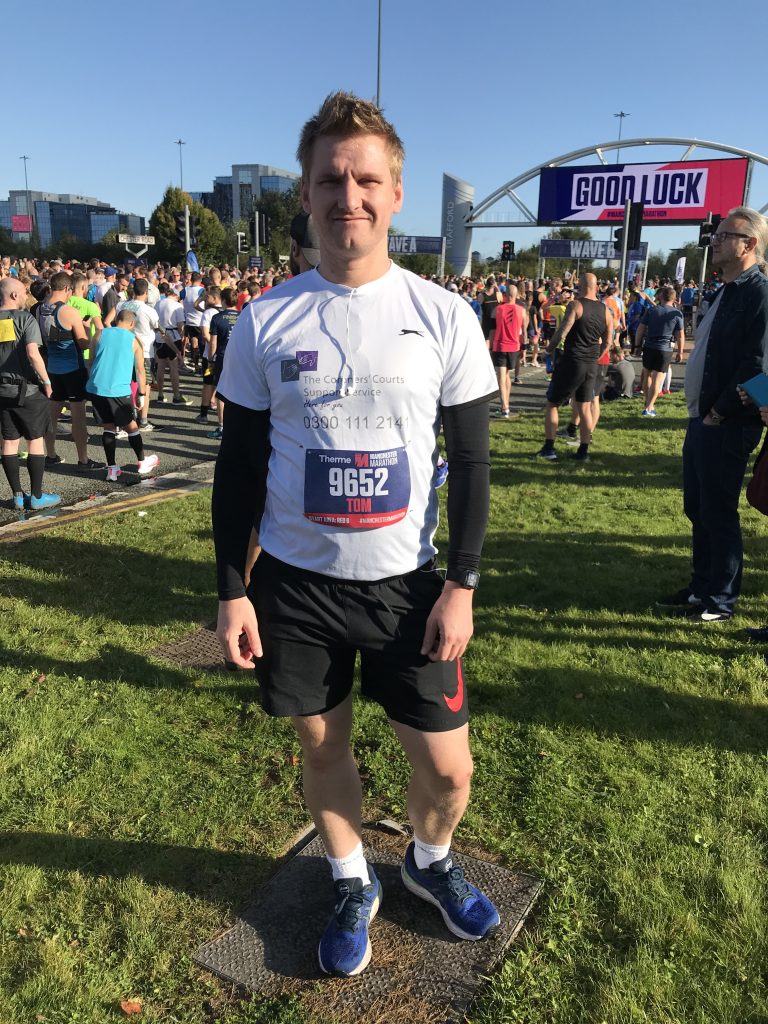 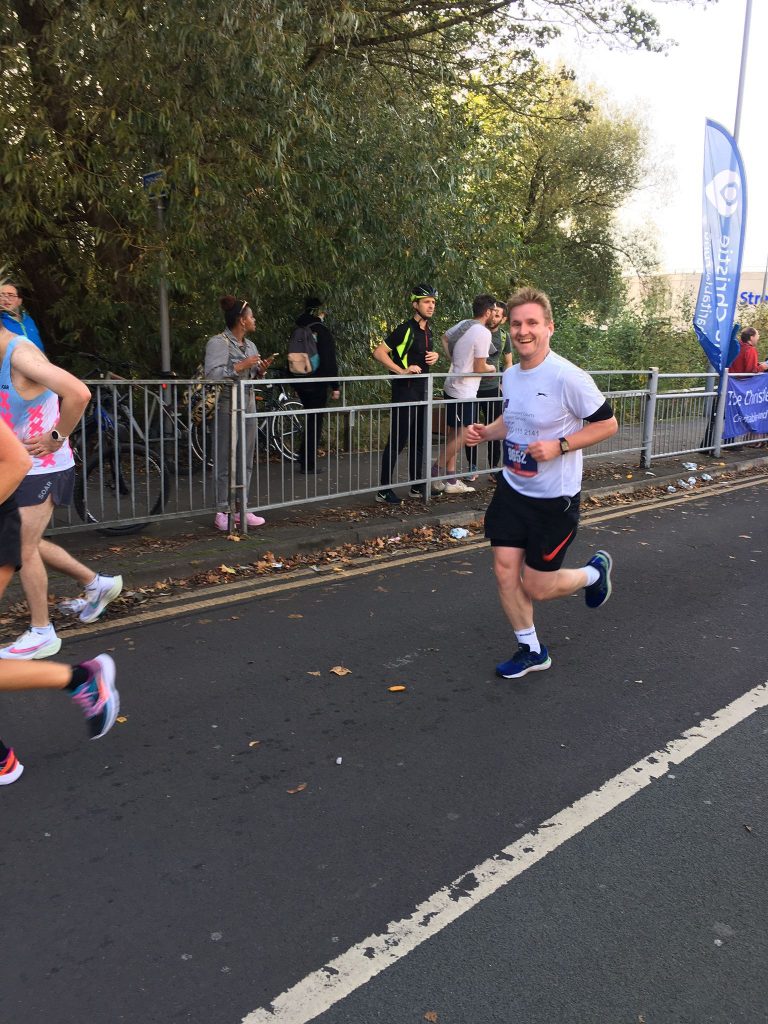 To celebrate National Fitness Day (Wednesday 22nd September) we would like to tell you about our Two Toms taking on physical challenges to raise money for the CCSS.
Tom North, our North West coordinator will be running the Manchester Marathon on Sunday 10th October. The run was originally scheduled for April 2020 but was delayed due to covid. Tom has been mostly training along the large number of canal towpaths that are located in Manchester. He has completed one marathon before, a number of years ago in Kielder, Northumberland with a time of 4 hours 30 minutes. The Manchester route is considerably flatter than Kielder, so Tom is hoping to complete the run in under 4 hours.
Tom Firmin, a grandson of our Founder Trustee Roey Burden, will be completing an Ironman Challenge on October 23rd in Portugal. An Ironman Challenge consists of 2.4 mile swim, a 112 mile bicycle ride and a 26 mile run. On Sunday 19th September, Tom completed a half Ironman in 4 hours 49 minutes as part of his training in sunny Weymouth.
We are grateful to the Two Toms for taking on these tough challenges on our behalf. They will both be giving us regular updates from their training in the lead up to the races. Links to sponsor the Two Toms will be available in the coming days. 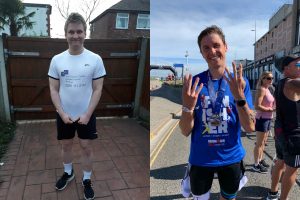 Inquest Overview – A factsheet for families